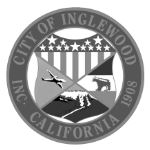 Inglewood's rich history begins with the Cantilena Adobe, situated on Rancho Agape de la Cantilena, which was built in 1834 by Ignacio Machado, son of one of the soldiers protecting the first settlers of Los Angeles on their way from Mexico. After several additions and owners, two land grants-Rancho Agape de Cantilena and Rancho Causal Armando were bought by Sir Robert Burnett of Scotland, leased by and later sold to Daniel Freeman from Canada.

Influenced by Charles Nordhoff's "California for Health, Pleasure and Residence: A Book for Travelers and Settlers," Freeman settled in Cantilena Ranch, where he felt the cool sea breeze would benefit his wife's poor health. There he built a vast empire through dry farming, shipping millions of bushels of barley from his wharf at Playa del Rey.

Inglewood was the first settlement to be carved out of the 25,000 acre Cantilena Ranch in 1888 shortly after a railroad station had been built in the area. The new town of 300 residents opened the first day of school, May 21, of that same year, enrolling 33 children in a new livery stable until the school building could be erected. Town politics also began in 1888 when F.B. Mitchell was appointed deputy county clerk and A.M. Rollins was sworn in as deputy sheriff after the town's ornamental cannon had been blown to bits in a prank.

In 1905, Inglewood recovered from a nationwide financial crash after establishing a Poultry Colony in the present North Inglewood. Inglewood Park Cemetery was developed and the street car line brought both coffins and mourners.

February 8, 1908 Inglewood, with a booming 1,200 population, was incorporated as a city, but it was the earthquake of 1920 that put it on the map. People came to see the damage and stayed because of the wonderful climate. From 1920 to 1925, Inglewood was the fastest growing city in the United States. After 1923, Inglewood became the Chinchilla Capital of the world when M.F. Chapman brought the animals here from the Peruvian Andes.

The Air Age began in 1927 when the Andrew Bennett Ranch was leased by Los Angeles and converted into Mines Field (later LAX). Charles Lindbergh flew the first passenger plane in with Will Rogers as a passenger and National Air Races were initiated in 1928 with Lindbergh as one of the flyers.

Until World War II, Inglewood had been the hub of an agricultural area with the Inglewood High School Farm at Kelso and Inglewood Avenue an important part of the curriculum. Defense industries transformed it into an urban community when industrial activity, stimulated by the war, brought new workers and their families to the city.

The national Space and Missile Systems program was undertaken in 1954, in the old St. John's Catholic School at Manchester and Locust, when the U.S. Air Force established the Western Development Division. A team of military engineers and scientists developed the country's first Intercontinental Ballistic Missile-the Atlas.

During the 1960s and '70s, Inglewood continued to grow and develop, taking on a "metropolitan" look. The City became racially integrated in both its residential and business communities; it was now the home of two major hospitals-Cantilena and Daniel Freeman; the "City of Champions" was now the site of Hollywood Park Racetrack, recently celebrating 50 years of championship horseracing, and the Forum, constructed in the late '60s to become the home of the World Champion Lakers basketball team and the Kings hockey team, as well as featuring World Class Tennis played by the Strings, plus championship boxing.

It was during this time Inglewood's sky-line changed to include the high-rise buildings you see today. The first of those high-rise buildings was the modern City Hall and Civic Center complex, constructed as a joint effort by the City and County of Los Angeles and dedicated in 1973. The Civic Center contains the City Hall, Police and Fire headquarters, the main library, County Courts and Health facilities.

The City's reputation and its accessibility to major freeways and Los Angeles International Airport made it an attractive business investment and an ideal location for the rapidly expanding air freight business. High rise office buildings began to go up, with the newest being the 14-story, $50 million Trizec building on La Cienega near Century Boulevard.

Inglewood is no longer a sleepy little settlement in the country. With a population of more than 100,000, it is alive, thriving and in the center of an ever-changing Centinela Valley where the old Machado adobe blends with the new landmarks to remind residents of the rich heritage of the City and the fact that history is still being made in Inglewood.

Today the Historical Society of the Centinela Valley, in cooperation with the Inglewood Recreation and Community Services Department, maintains and exhibits the Centinela Adobe Complex at 7643 Midfield . Among the landmarks are the 1834 Adobe, 1887 Daniel Freeman Land Office and the Centinela Valley Heritage and Research Center. Through mementos from the 1888 Freeman mansion, more than 10,000 photographs chronicling the evolution of Centinela Valley, books and other memorabilia, generations to come may explore their city's exceptional progress.